The name Vallecito, which means "Little Valley," dates from Spanish times. The salt grass cienega made the valley the goal of travelers to California from Sonora in the early years of California, as it held the first good water in any quantity to be found on the west side of the Colorado Desert. During the Gold Rush period immigrants in large numbers stopped to refresh themselves and their animals after what was called "The journey of Death" across the Imperial Valley. The road through this valley was the great southern immigrant trail, the only wagon road into Southern California. In the early 1850's James R. Lassator built the house, of sod cut from the cienega, to serve as a stopping place for parties passing through. The roots can be seen in the walls. This structure is not an adobe. Vallecito was an important stop for Army detachments leaving and entering California, from the time General Kearny's Army of the West stopped here on the road to defeat at San Pasqual. The house became a station on the San Antonio-San Diego Mail Route (The "Jackass Mail") in 1857, and in 1858 it was made one of the stops of the famous Butterfield Overland Mail. It is one of the chief landmarks remaining from the great stage line between Missouri and San Francisco. The present building is a reconstruction. It is nineteen miles south of Scissors Crossing which is twelve miles east of Julian on Highway 79. 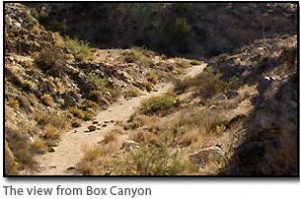 A little over eight miles south of Highway 78 at Scissors Crossing, the Vallecito road passes along the west side of Box Canyon, a narrow defile about a mile long. Through the bottom of the wash went the California-Sonora Trail of the Mexican Era, the route of General Kearny and the Mormon Battalion, the Great Southern Immigrant Trail of the Gold Rush and after, and the Butterfield Overland Mail road. On their long march from Council Bluffs to San Diego, the Mormon Battalion hacked out, with axes, a way for their wagons through the chasm in the rocks, which, until then, had been a foot too narrow. Box Canyon became, thereby, the first wagon road into Southern California, and prairie schooners with their shuddering white tops creaked through it like ships through a canal. There were only inches to spare, even for Butterfield's Concord stage coaches. Completion of more direct wagon roads east from San Diego and Los Angeles caused the old trail to the Colorado to be gradually deserted in the latter years of the Nineteenth Century. 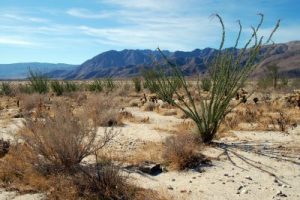 In 1774 Captain Juan Bautista de Anza opened the overland trail from Sonora to California which bears his name. It was badly needed to keep Californian settlements supplied, and in contact with Mexico, in case of a war with a maritime power. On his second expedition over the route he brought the first white women to California among the settlers in his party, who were sent out to found San Francisco. On this journey Captain de Anza stopped from December 20 to 22, 1775, at El Vado, in the mouth of Coyote Canyon, 7.1 miles north of Christmas Circle in Borrego Springs. El Vado means "The Ford." 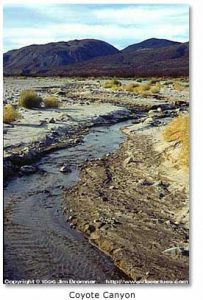 Captain Juan Bautista de Anza's second expedition marched through this little pass December 19, 1775 on its way to strengthen Spanish colonization in California. Many of the 240 members of the party were recruited from Mexico to be the first residents of San Francisco. They had camped the preceding night somewhere in the wide flats just east of this monument. 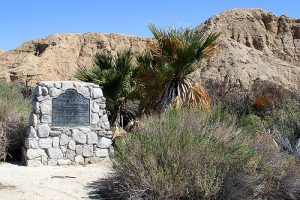 Here Mexican pioneers coming to California between 1862 and 1866 rested among the palms; here, too, came mountain men, the Army of the West, the Mormon Battalion, a boundary commission, '49ers, a railway survey team, the Butterfield Overland Mail stages, and the California Legion. This was the site of the Butterfield stage station built in 1858 by Warren F. Hall.

This pass, Puerta, between the desert and the cooler valleys to the north, was used by the Mormon Battalion, Kearny's Army of the West, the Butterfield Overland Mail stages, and emigrants who eventually settled the West. The eroded scar on the left was the route of the Butterfield stages, 1858-1861. The road on the right served as a county road until recent years. 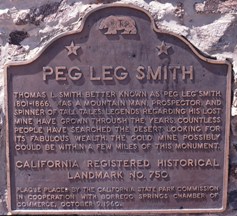 Thomas L. Smith, better known as 'Peg Leg,' 1801-1866, was a mountain man, prospector, and spinner of tall tales. Legends regarding his lost gold mine have grown through the years, and countless people have searched the desert for its fabulous wealth. The mine could be within a few miles of this monument.  more info 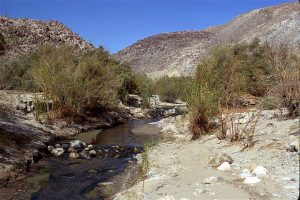 This spring was named by Captain Juan Bautista de Anza when his overland exploration party camped here on March 14, 1774, on the journey that opened the Anza Trail from Sonora into Alta California. Anza's colonizing expedition of 1775, consisting of 240 persons and over 800 head of livestock, camped here the night of December 23.

Here the southern trail of explorers, trappers, soldiers, and emigrants crossed ancient trade routes of Kamia, Cahuilla, Diegueno, and Luiseï¿½o Indians. On the flat southwest across the creek, Warren F. Hall built and operated the San Felipe home station of the Butterfield Mail, which operated from 1858 to 1861. Later the station was used by Banning Stages and by the military during the Civil War.